Sometimes in life, we simply have an off day. Whether it is the baseball pitcher that suddenly can’t throw a strike or the public speaker that finds himself tripping over his words, an occasional poor performance is part of the human condition.

When it comes to the proverbial “bombed” test, emotions run high. For better or worse, there are always going to be students that ask for a retake when they receive a subpar test grade.

Here, we will discuss the question of how to ask your teacher to retake a test. The topic will be considered from the perspective of both the student and the teacher. We touch on some ethical considerations, and the right and wrong ways to ask for an accommodation.

Quick Answer: How to Ask Your Teacher to Retake a Test?

Any time that you ask a teacher for special accommodations, you need to be fair and respectful.

Lastly, remember that a test retake is never truly a make-or-break situation.

Hard-working students often devote so much time and energy to their studies that they can lose perspective. Whether or not your teacher approves a request for a test retake — repeat after me — everything will turn out just fine.

Teachers Have to Fairly and Equally Enforce Rules

Before requesting a retake, don’t forget to consider the situation from your teacher’s perspective. As a student, it is easy to think that your teacher should simply accommodate your request. You probably work hard, study for exams, and pay attention during lectures.

Maybe you have a good excuse for why you bombed the test. To you, it seems perfectly legitimate.

But if your teacher makes an exception for you, the teacher then has to become the arbiter of excuses.

Maybe while you were preparing for the test, your parents announced they were getting divorced. On the surface, this seems like a great reason why you should be allowed a retake.

However, what happens when another student asks for a retake because his dog died the night before the test? And another student, still, has a sick Grandma that he needed to see at the hospital.

As you can see, there are a number of legitimate causes for a poor test performance. But if your teacher makes an exception for one, then she has to decide which other excuses are “legitimate.”

As teachers, we would rather focus on hundreds of other skills besides judging whether it is “worse” to have a sick Grandma or a dying dog or parents announcing a divorce.

Remember That a Poor Performance is a Learning Experience

While a poor test grade never feels good, don’t forget that there is a lesson to be learned from the experience.

Most often, the lesson is that you should have started studying earlier. If you wait until the last minute, it is very common that a conflict comes up at the last minute.

Another lesson, which is valuable both in school and in life, is that sometimes — stuff happens. If you are aiming for a 90%+ in the course, try to score 95% on some exams, because there will inevitably be a <90% score that needs to be averaged up.

One challenging part in a teacher deciding whether or not to allow a retake: it may be reasonable to say that bombing a test is a learning experience that provides an opportunity for growth. Even though it is stressful at the time, sometimes you have to accept the subpar result and move forward, rather than trying to get a “do-over.”

After decades of teaching, we have seen many derivations of the, “If I don’t get an ‘A,’ something terrible will happen” argument.

Frankly, it is too common, and it is wildly unfair to teachers.

Essentially, this argument is when a student tries to use guilt to force a teacher to give them a particular grade or accommodation. A student says that his parents will physically punish him if he makes a poor grade, or a student says she will lose a college scholarship if she fails the course. Even worse, a student might threaten self-harm if he or she doesn’t get the grade they desire.

If you are considering any of these tactics, I will put it very simply — just don’t do it. Resorting to these unfair and abusive threats in order to accomplish a goal isn’t worth it.

And as a young person, the things that you do now will form habits for your behaviors throughout the rest of adulthood.

What Not to Do

Any time you ask for a favor, there are some things to avoid.

As discussed above, it isn’t fair to attempt to guilt your teacher into offering a retake. No matter who died, who got sick, or who is getting divorced, it really isn’t your teacher’s job to accommodate your retake request.

Next, be sure not to make any negative or accusatory remarks about the test.

You can say, “I don’t think my test score accurately reflected my knowledge of the subject,” but never say, “There were some unfair test questions, and some that were confusingly worded.” Your teacher will perceive this as an excuse, and it will only make them less likely to do you a favor.

The Proper Way to Ask

If you want to request a test retake, make it easy for your teacher to say “yes.”

Ultimately, you should be cordial, direct, and to the point.

Something like, “Mrs. Jones, I scored poorly on last week’s test, and I don’t feel the score was indicative of my knowledge of the subject material. I would love to prove my competency on the material and would appreciate the opportunity to retake the exam,” should do the trick. Don’t overthink it; don’t get too fancy.

Regardless of the outcome, be sure to thank your teacher for his/her time.

If you have a direct line of communication with your teacher, a face-to-face discussion is usually most appropriate. However, if this isn’t feasible (such as a college lecture with 300 students), an email is acceptable also.

A couple more items to keep in mind:

As a teacher, should I allow test retakes?

There isn’t a right or wrong answer here.

Some teachers decide to never deviate from the syllabus. This means that no requests are typically accommodated.

On one hand, this avoids any accusations of preferential treatment. It also avoids the ethical dilemma of arbitrating the worthiness of excuses.

Other teachers accept that students, too, are human. And as such, they are destined to make mistakes and have poor performances on occasion.

This is certainly a reasonable response. Just remember that any time you deviate from the stated policies you have to be careful about the implementation. It makes for a challenging day when your attempt to help one student is perceived by another student as preferential treatment.

Ideally, you should determine at the start of the semester what accommodations you will or will not grant. When possible, state these accommodations in the syllabus. Then, handle each case carefully, paying close attention to the fairness of any exceptions you grant.

Asking a teacher to retake a test is a situation that should be handled delicately. Ultimately, you want your teacher to see things from your perspective and grant the request. But at the same time, you don’t want to lose the respect of your teacher or put him/her in an unfair situation.

By being direct and respectful, you maximize your teacher’s likelihood of saying yes. But don’t forget that your attitude and effort level throughout the semester may also factor into the decision.

Lastly, remember that bombing a test isn’t really that big of a deal. In a year’s time, it will be a distant memory that really doesn’t matter. 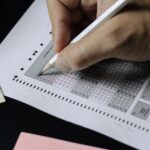